I had no idea what to do with this scene at first, because I hadn’t looked at this story in more than two years prior to this post, and reading it to refresh my memory can be fairly well summed up in this pin: 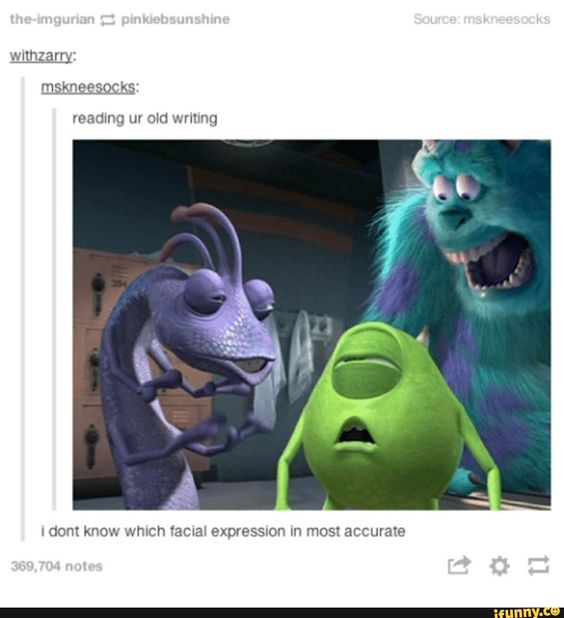 Also, that moment when you can tell something you mentioned is super important but it’s been so long that you have NO IDEA where you were going with it… #writerproblems

I decided to give it up after a couple hundred words and work on figuring out the world instead and after that it went much better. I’m still not a huge fan of the writing itself, but at least I know where the story’s supposed to begin at this point. Enjoy. :)

I stepped into the dorm room where I’d be staying and looked around. There was a bed against each of the side walls and a wide window let in plenty of natural light that turned the room orange due to the color of the curtains. I was observing a red flame sculpture when a deep voice sounded behind me.

“You must be my new roommate.”

I wheeled to face the tallest, most muscular elf I’d ever seen, with a shock of white-blond hair and piercing gold eyes. I couldn’t keep my voice from shaking ever so slightly as I nodded and held out a hand. “Skandain.”

He shook my hand and I felt certain he could have pulled my arm from its socket if he’d wanted to. “Brant.” He smiled.

“Nice to meet you.” I let go of his hand and fiddled with the rock in my pocket.

“You too. Liking the school so far?”

“I haven’t really seen much…” I glanced around the room. “Is there a clock in here somewhere?”

“No. Shale makes sure we’re all up bright and early in the morning and there’s a loud bell for classes – can’t miss it – so clocks aren’t really necessary.”

“Ah. I was going to see how long I have before… initiation? Is that what Shale called it?”

“Just a few minutes. If you want to be really on time we can leave now.”

“You haven’t been initiated either?”

“Oh, no. I’ve been here for three years. I’m a fire elemental. But I can show you where the building is, and older students tend to watch too.”

“Oh. Right.” I continued twirling the rock between my fingers in my pocket.

Brant gestured for me to follow him and led me out of the dorms onto the packed wood paths that linked all the buildings in Elferion Academy. As we passed I noticed again, as I had on the way in with Shale, that all of the buildings bore the school insignia: It was like a squiggly tic-tac-toe board with a flame in the center box and a diamond in the upper right corner. The same emblem that was carved into the rock I was playing with. We walked all the way across the school to where the administrative buildings were and entered a short building with windows all the way across the front. Apparently this place loved natural light.

The room we entered was filled with benches from the halfway point to the back. The front had a row of four desks with a chair in front of all of them facing out toward the benches.

“That’s where you sit for them to determine what element you are.” Brant pointed to the lone chair. “The desks are for element studies later on.”

I nodded and Brant directed me to a bench near the front. A moment after we sat the door opened and four adults walked in, two men and two women. All of them were elves. They moved to sit behind the four desks and began talking in hushed tones.

“That’s Caelum the headmaster, Arianthe, Baara, and Galen.” Brant pointed to each one in turn and I nodded. “Air, earth, fire, and water. There’s never an unbalanced number of any one here at the school.”

“That causes… a lot of issues. Caelum figured that out pretty early on.”

“Let’s hope you never get to find out.”